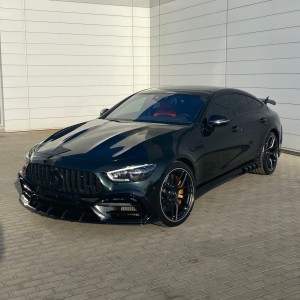 TopCar Design designs and manufactures aerodynamic kits for a number of automobile brands, but the most part of designs is created for cars.
One of the latest models is the aerodynamic kit for the GT 4 Door. All TopCar Design kits share a common general design key — powerful, aggressive lines reminiscent of a shark character. You can find these parallels in each design of the tuning company. The factory design of the GT 4 Door was originally conceived to evoke direct associations with a shark. The designers and engineers of the TopCar Design company could only develop the idea and made the shapes much more aggressive, add the characteristic gills and shark fins. This was done with a great success.

Indeed, this design idea has been perfectly realized on the AMG GT 4 Door. Let’s go through all the elements of the «INFERNO» body kit from TopCar Design. The front bumper has received a massive overlay, which actually consists of a large number of components: on the left and right you can see bloated aerodynamic elements with small vertical stabilizers at the edges. Additional LED lights have appeared in the wide air ducts of the front bumper — at night they add spectacularity to the appearance of the car. A large aerodynamic diffuser has been added to the central bumper. The radiator grille has retained its free shape, but the vertical sipes have now received carbon inserts, and the emblem has a carbon edging. By the way, at the request of the client, the star can be replaced with the TopCar Design brand emblem — a volumetric shark. The factory hood in the standard version had small ribs, but the designers of the tuning company made them more pronounced, and added air ducts around the edges — the gills. They are implemented in a rather unusual way — they are located on the inner plane of the ribs and they look at each other from different sides of the hood. Thanks to this design decision, the car began to look like an infuriated predator that greedily swallows air. 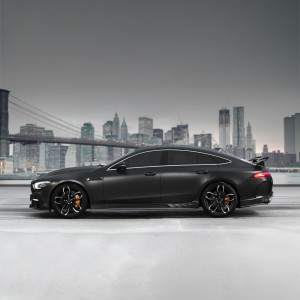 Let’s go to the sides of the car. The front fenders of the AMG GT 4 Door have replaced the modest fenders with characteristic shark gills — a continuation of the main design idea. They were additionally equipped with TopCar Design emblems — shark figures. The main element of the side of the car is the side skirts, sills, which received vertical aerodynamic stabilizers, as on the front bumper, but also much more noticeable elements — the gills. They are placed closer to the rear wheels, but what is particularly interesting here is that the gills are functional — they direct air through them to the rear wheels.

At the rear, the car has received a new bumper entirely. The difference from the standard bumper is the changed geometry on the sides, where the vertical air ducts have become larger and received more aggressive linings. And also below — a huge aerodynamic diffuser with side vertical stabilizers, which are similar to those located on the side skirts and on the front bumper. The exhaust tips remain standard. But in the upper part of the rear bumper, in the center, a design element was added that resembles an air intake in shape. The aerodynamic body kit also includes a large wing with sharp keels, which is also a reference to shark fins.
Each element of the aerodynamic body kit is made of carbon fiber and kevlar. Tuning studio TopCar Design independently manufactures all parts by vacuum forming, which allows you to get flawless quality. 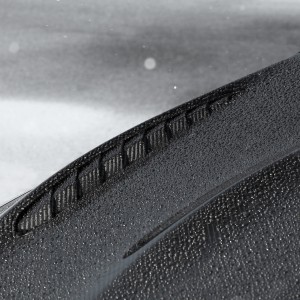 Each part can be coated with a transparent varnish (visible carbon) or
painted on the outside with paint (for painting/primed). If you open the hood, inside you will see the signature TopCar Design pattern — camouflage, which is formed by carbon and kevlar fibers. In addition to the above elements, the body kit includes carbon fiber door handles, side mirror housings, as well as a shark fin on the roof in the rear window area. Moreover, TopCar Design offers several types of carbon — the original 2×2 Twill carbon fiber or 4×4 Twill carbon fiber.

In addition to the body kit, the TopCar Design tuning studio offers the branded line of forged wheels in various designs and in various finishes with a diameter of 21 inches: GT Style, Shark Style 2 and Fury Style.
Each of the body kit elements can be ordered and installed separately upon the request of the customer. The only exception is the rear bumper, which can only be fitted with a diffuser as a whole piece.
The body kit can be installed on all versions of the AMG GT 4 Door — 63, 53 and 43 AMG.
TopCar Design has many years of experience working with dealers all over the world. Prompt delivery to any country is carried out, as well as detailed installation instructions are provided, as well as the specialists of the main office are always in touch and ready to provide any consultation remotely. 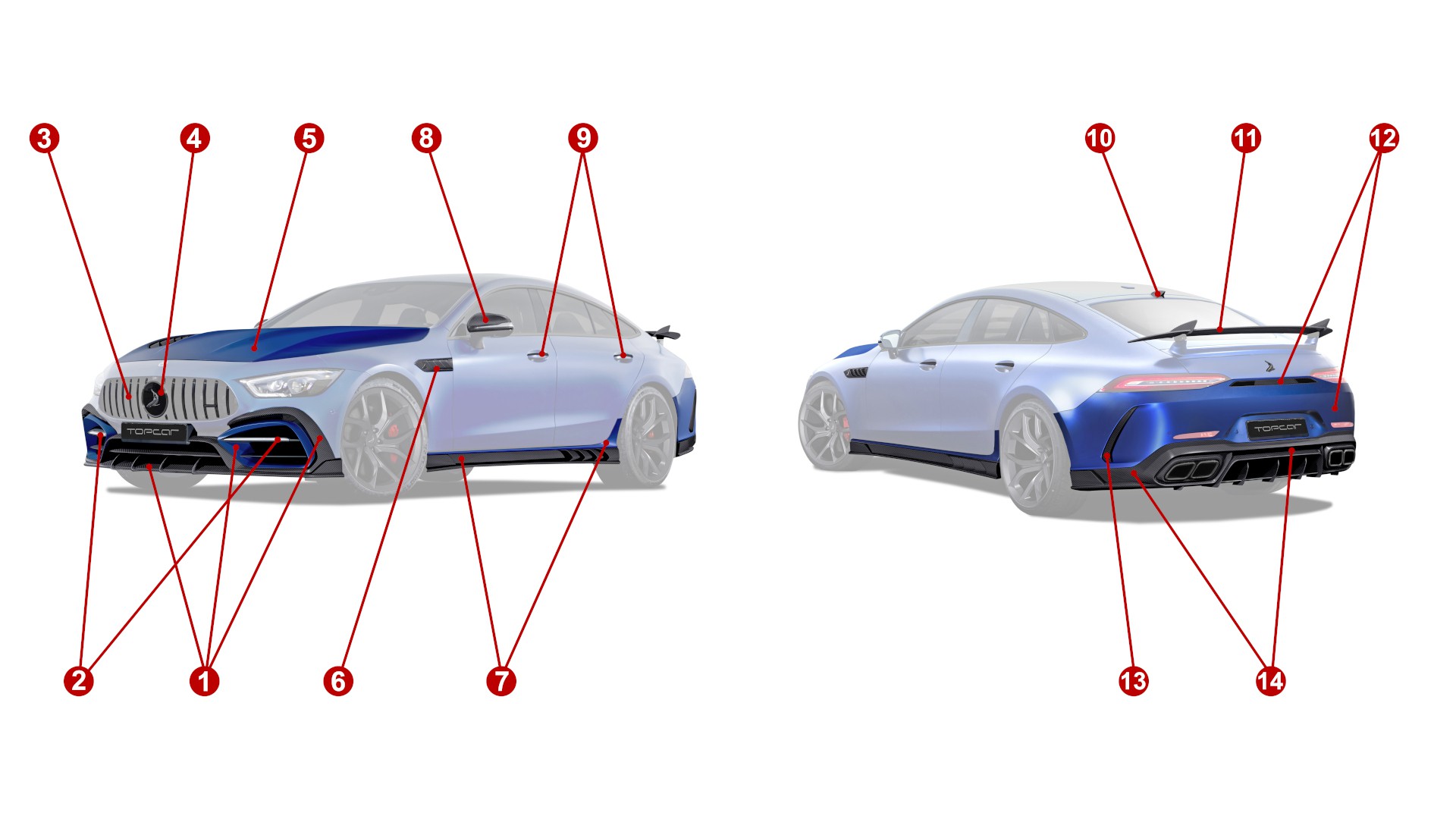 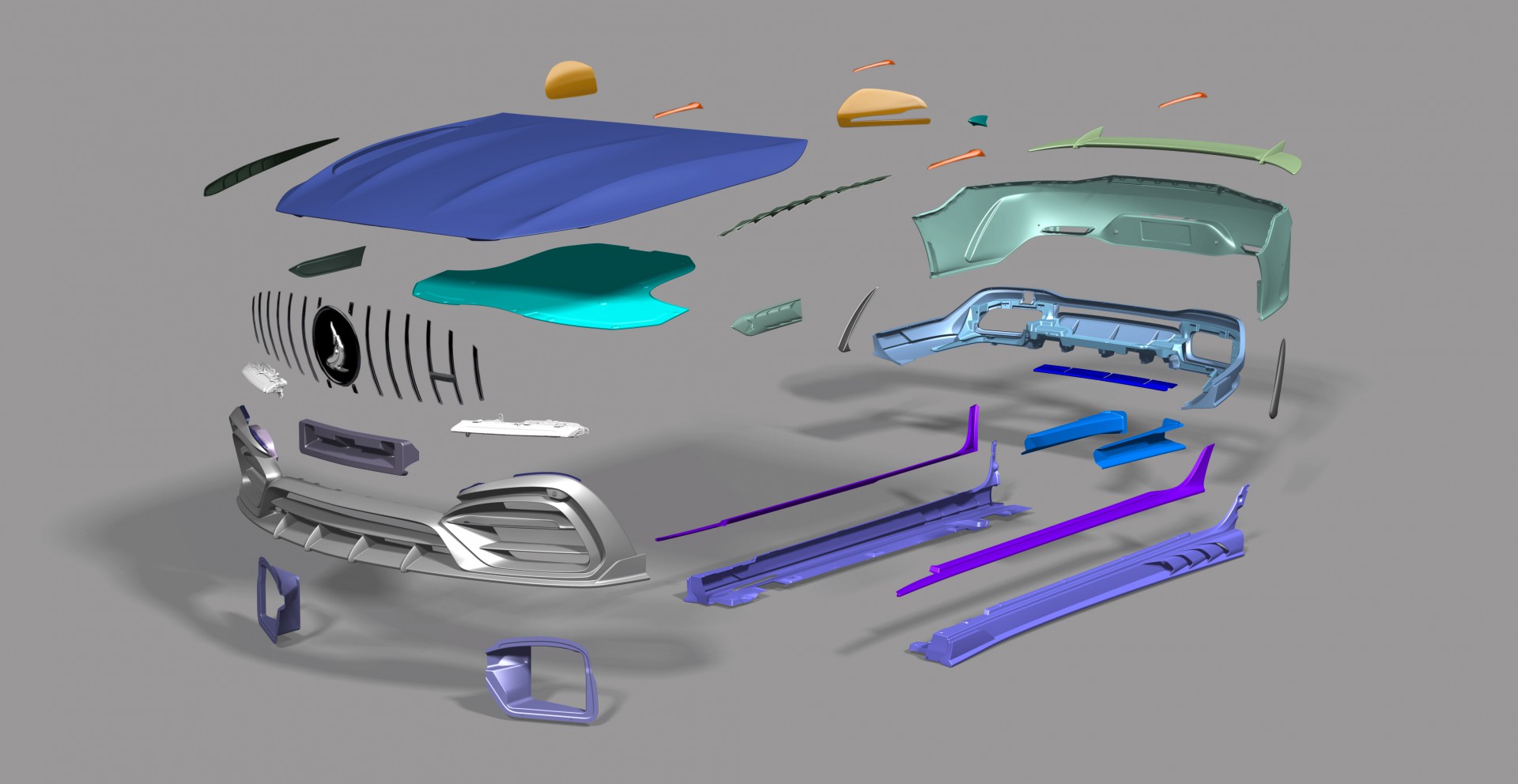 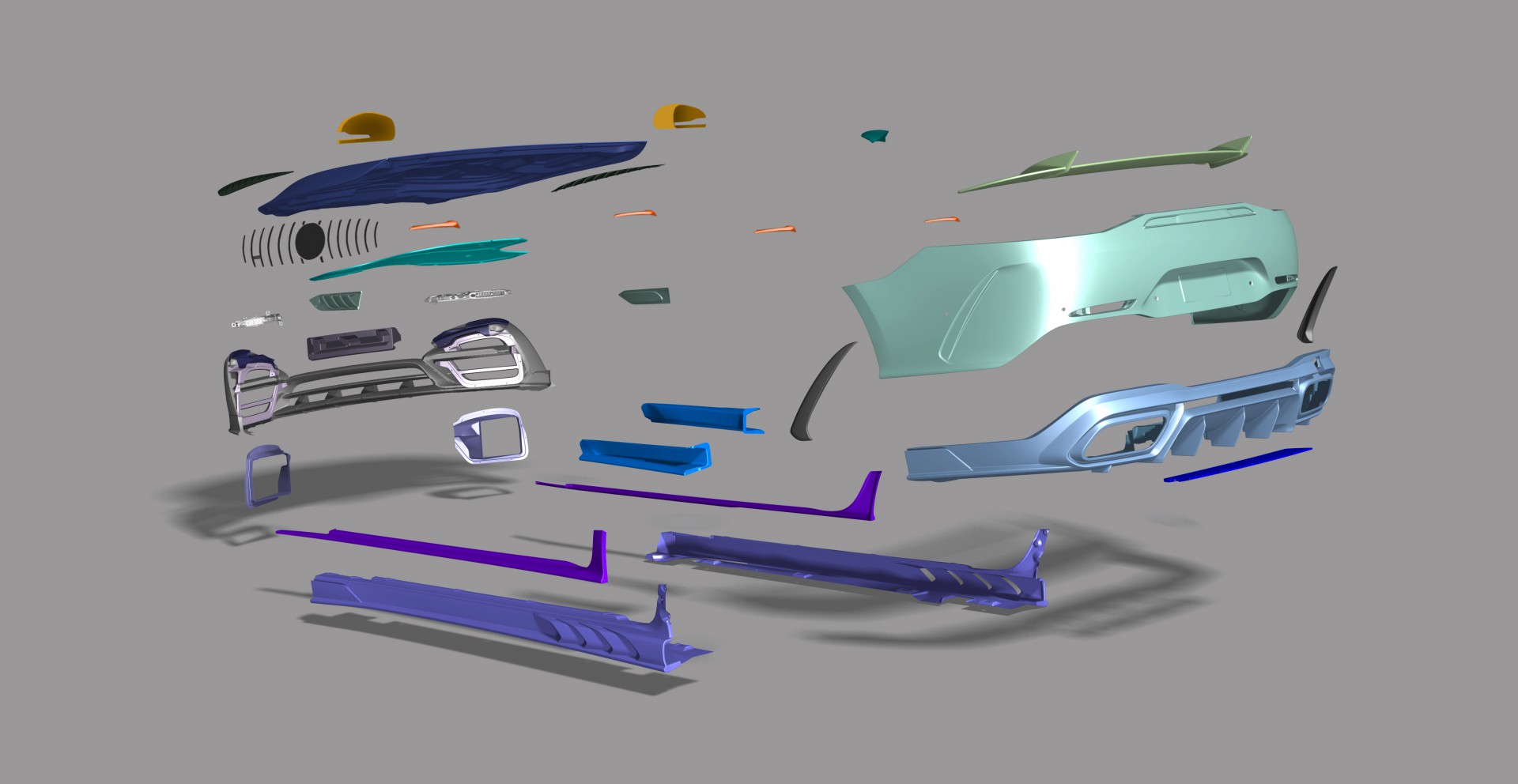 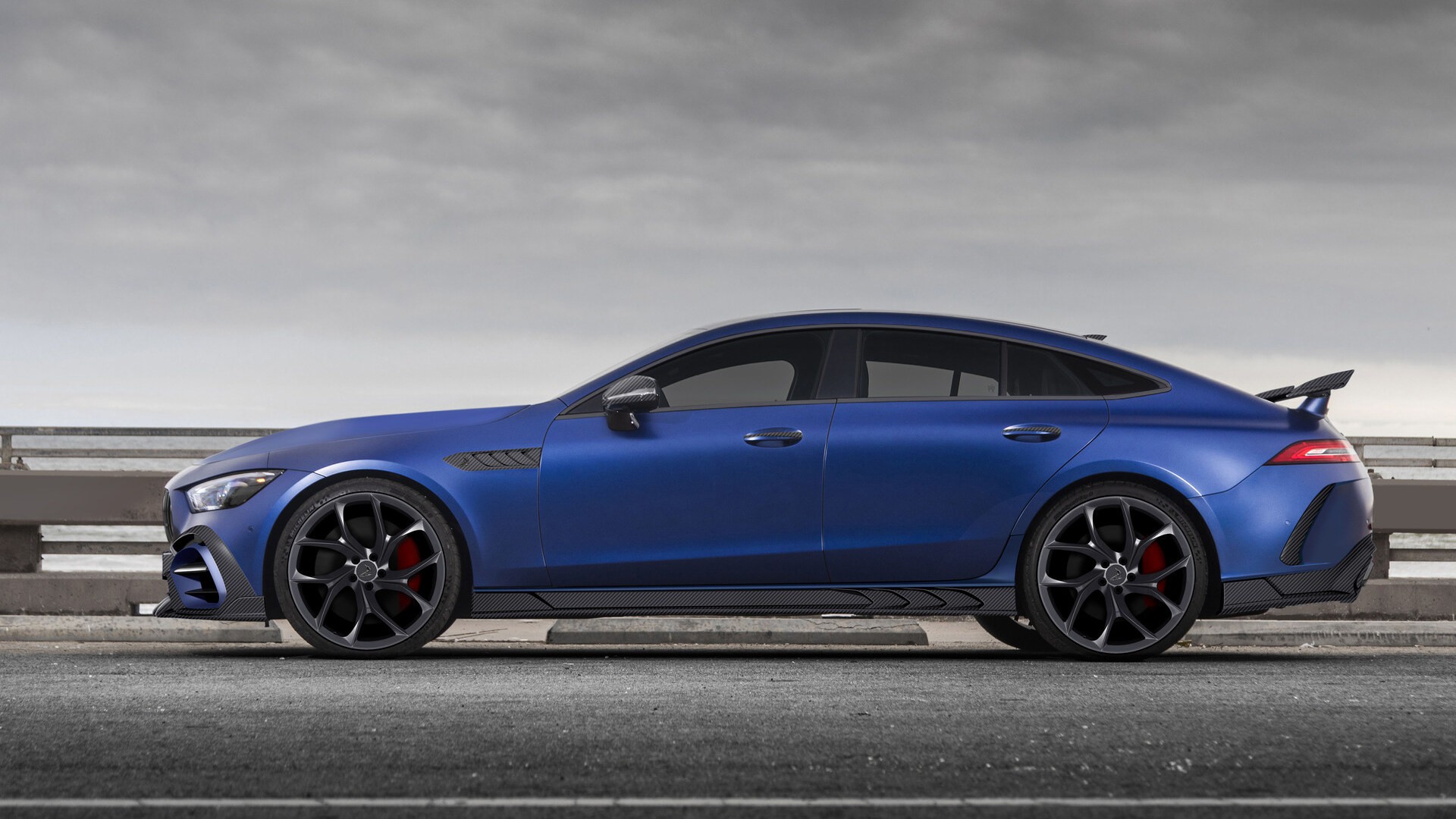 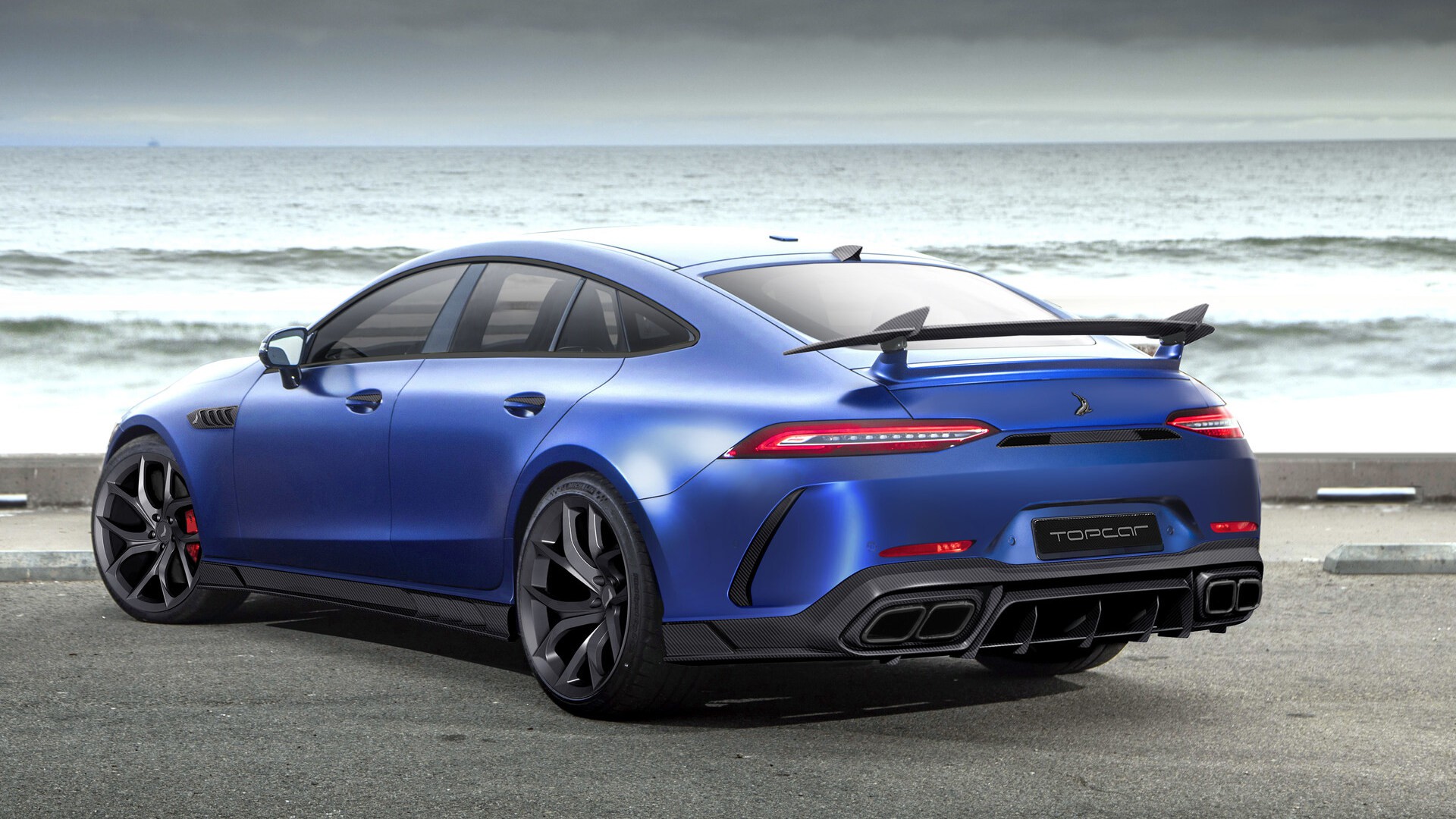 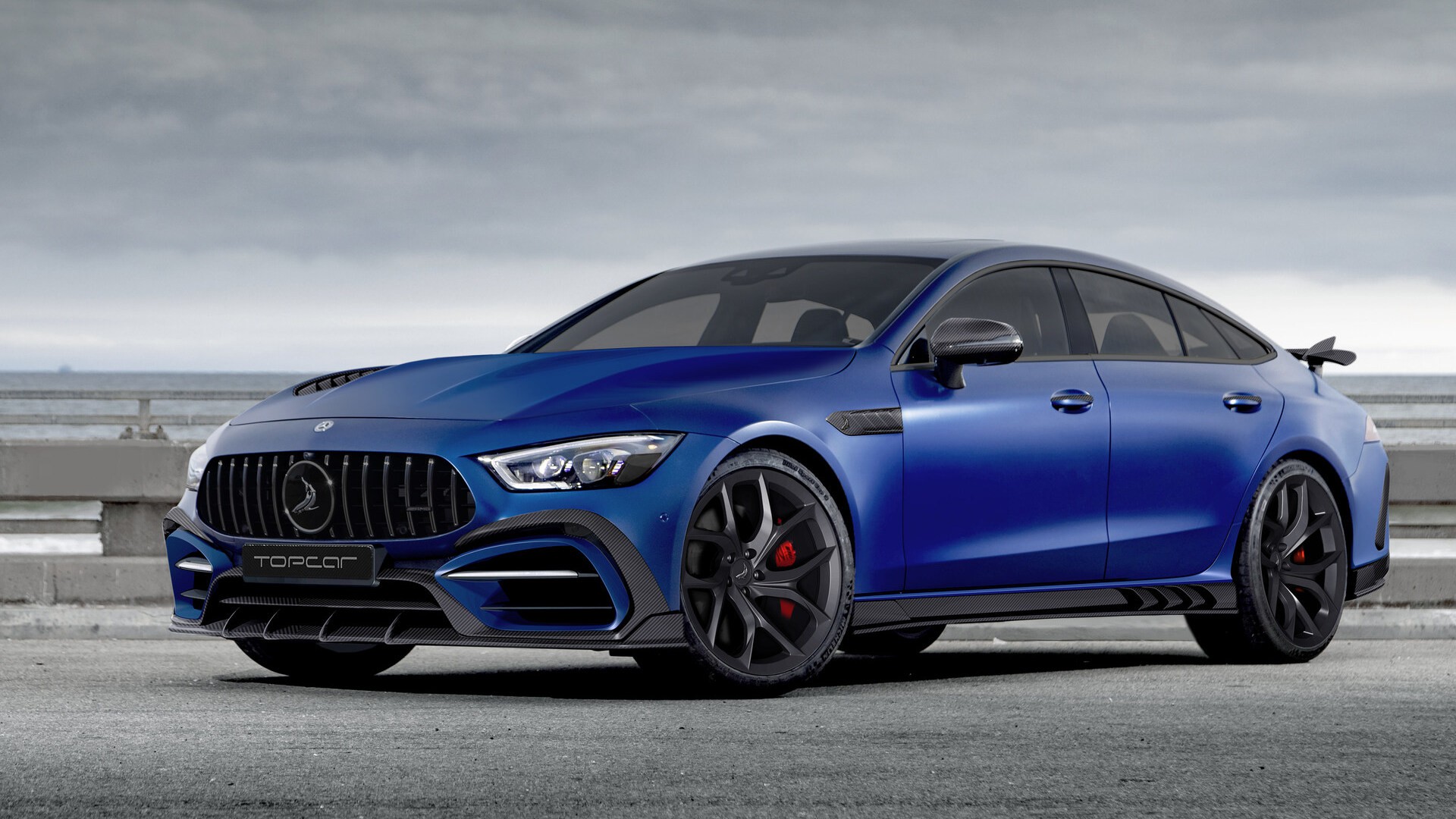